A Rose by Any Other Name is Still a Rose:  Why Labels Matter (#5) 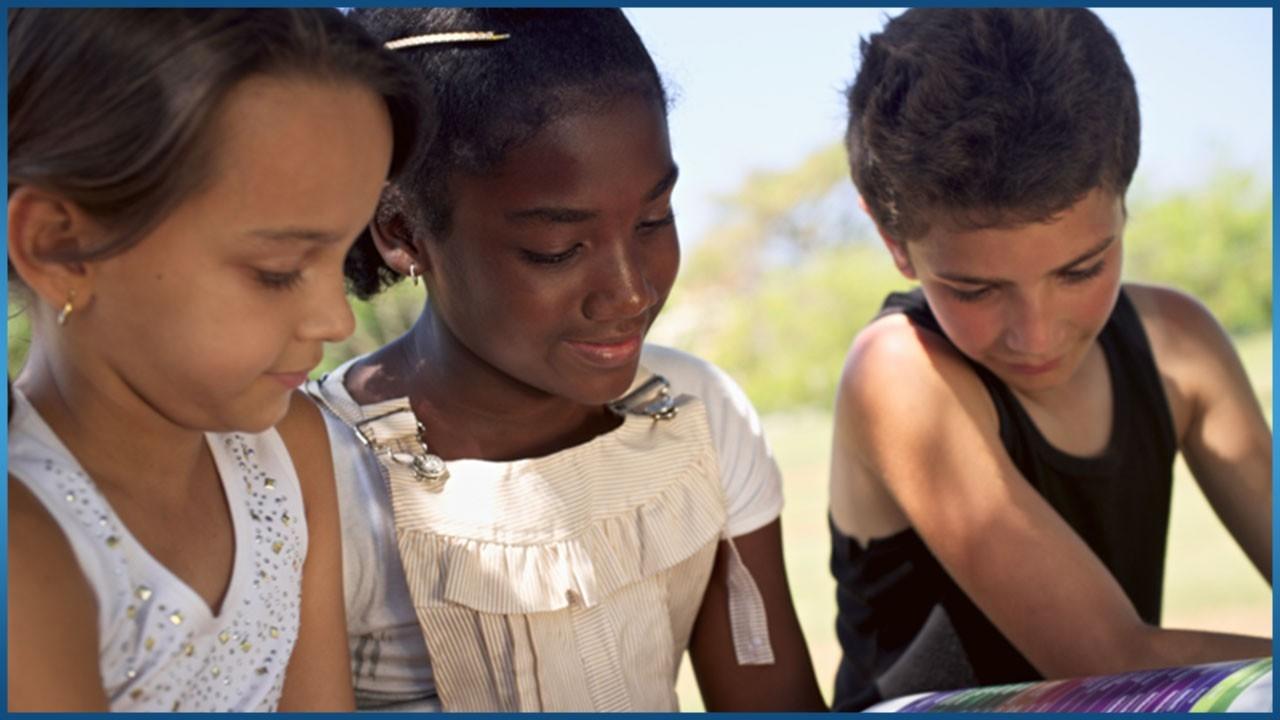 People often ask me how to refer to various ethnic/racial groups.  What’s better, Black or African American?  If it's okay to say “people of color”, why not say "colored person"?  First, my history, then a deep dive into how complicated a subject it is.

I was raised as a Negro child in a Negro family in a Negro community in the segregated South. We capitalized Negro.  That fight had been won in the 1920s.[1]

People in my community were very proud to say we were Negroes and not coloreds. Colored is what White people called us when they wanted to diminish us. I can still hear White clerks in downtown shops referring to “that colored gal.” I grew to detest that term.

The switch from colored to Negro began well before I was born. Legendary Black leaders Booker T. Washington and W.E.B. DuBois led the switch in the 1920s, although they initially had opposition.[2]  People of the times objected to the term Negro because it seemingly disconnected us as a people from our African roots, yet DuBois and others maintained that it was more substantive than either African or colored.

The word Negro was also seen as problematic.  White segregationists with a Southern drawl would say it so it sounded dangerously close to the N-word.  I still remember hearing older White men refer to “that Nigra,” to avoid using the proper pronunciation.

Of course in the 1950s and most of the 1960s, we were definitely not black. To call someone black was to insult them. “Yo mamma so black, she stepped out the car and the oil light came on.”   Black described those people who lived in Africa who made themselves subservient to Tarzan.

While the African Blacks on television were widely portrayed as ignorant and “uncouth,” I heard a different story at home.  My mother said that her once enslaved grandfather boasted he was a member of an African tribe. My father told me that Africans had ruled kingdoms. Reconciling the degrading images on television with my parents’ portrayal of royalty was challenging as a child.  I had to grow up and learn our history before it all made sense.

In 1960, four Black teenagers staged the sit-in at Woolworths in Greensboro, North Carolina that launched the civil rights protest movement. Most of them self-identified as Negro.

A few short years later, near the end of the movement in the mid-1960s, Malcolm X had risen to prominence. He and other Black leaders (Mohammed Ali, Stokely Carmichael) proclaimed that we were black. James Brown sang, “Say it loud, I’m black and I’m proud!” Black and proud!  We echoed those words: Black and proud and beautiful.

Twenty years later, a new name evolved. To my dismay, in December 1988, the National Urban Coalition with Rev. Jesse Jackson as the spokesperson declared that we were no longer black, we were African Americans.

African is not an ethnicity. Black here is. It’s all made up in the end, no? So you choose what you want. I choose Black.

About a decade or so ago, I asked a graduate class their preferred ethnic or racial identity. We were astonished at what happened next.

A Black student gave a fervent explanation of why she preferred African American. She said, “Whites are identified by their country. They are Irish American or Italian American.  They have roots.  We need to have roots too.”

A third-generation student whose people came from Mexico said she preferred Mexican, not Mexican American.

A second-generation Brazilian student said she preferred Brazilian American. She was definitely opposed to being referred to as Hispanic American because Brazil was colonized by the Portuguese, not by the Spanish. She was dismayed that people kept lumping her in with Hispanics.  She understood Spanish, she explained, but her parents spoke Portuguese. If she was going to be called anything other than Brazilian American, she would accept Latina.

A student who as a teenager made a dangerous journey to this country from Vietnam and subsequently became naturalized said he preferred to be identified as American, emphatically not Asian American. Just American.

What about other groups?  Some interesting generational differences emerged.

In the 1980s, my female graduate students resented being referred to as “girl” as insulting and infuriating. By 2010, when I asked women students how they felt about the term “girl,” they stared at me blankly. “We refer to each other as girls all the time. What’s the problem?”

Over a generation, attitudes had changed. I suspect that this change reflects maturity of the feminist movement. Prior to the feminist movement, it was quite common for male employers to refer to mature women as their “girls.” “My girl will call your girl and set it up for us.”

By 2010 those days had passed.  The students in my class had a stronger sense of their status in the world as professional women.

As must be evident, there are no clear-cut rules for how to refer to members of racial and ethnic groups.  The self-identifications of other groups change over time as well.

By that day in 2010 when the student declared that she preferred African American, Jesse Jackson had already made the announcement, and the term African American was gaining currency.[3]   Even then, questions remained about how we as Blacks would be identified in White media as distinct from how we identified ourselves.

To capitalize the B or not

Back up a few years. By 2005, I was following the lead of most Black media in capitalizing Black. Only the White media continued to keep it lower case.

When Jean Ramsey and I submitted the manuscript for Reframing Change to our publisher, the edited copy came back with all references to Black and White changed to lower case. My knee-jerk reaction was to feel dissed.  No, you cannot define me, I thought.

We responded that only the White media, not the Black media, used lower case.  We offered and they agreed that we would provide this rationale in the preface of the book:

Throughout this time, the White media had continued to refer to blacks, not Blacks, according to their style guides.

Last month, this all changed. I strongly suspect that this is part of the sea change that is now occurring as a result of millions of people watching George Floyd’s calloused murder on television.  Organizations everywhere are examining their practices for hidden bias.

On June 19, 2020. The AP style guide announced they would capitalize Black and Indigenous:

Newspapers fell in line rapidly. The New York Times, Washington Post, and others have announced they will capitalize Black when referring to us as an ethnic group.

This is big. The White media is saying that we as Black people have the right to define ourselves.  As Nicole Hannah-Jones (Ida Bae Wells), the Pulitzer Prize-winning journalist who spearheaded the New York Times’ 1619 Project[6] declared, “this is liberating to see.”

If you only knew how my generation of Black journalists had this capitalization forced out of us. This is liberating to see.

The question of whether to capitalize White

Notably, the AP has decided to delay the decision whether to capitalize White. Some people find the term uncomfortably close to endorsing White supremacy. Others declare that Whites do not identify themselves as a race as do Blacks. The Seattle Times is one of the newspapers.

Why do they capitalize Black in the article but not white? They did it twice in the article. Black has no reason to be capitalized, it's an adjective to describe someone, not an official title. This is perpetuating the divide.

In rebuttal, Kwame Anthony Appiah noted in The Atlantic:

I agree. Recall some of my White students were confused when I asked them about their racial/ethnic identity.  Not recognizing themselves as having a race allows race to be a property of others and whiteness to be the default.  Appiah continues:

And what of the argument that White supremacists may gain reinforcement if we capitalize the w in white?  The exact opposite might occur, says Appiah.

In a similar way, the power of the insult to be called Black lost its force when we defined ourselves as Black and Proud and Beautiful.

But it isn’t even real!  There is no genetic difference among the so-called races.

I imagine that some of you feel that this whole conversation is absurd since there is no genetic difference among the races.  (Note, though, that every public health scientist will tell you there is a biological or epigenetic difference – think about generational trauma – but that’s possibly a future blog.)

So let me explain why this is so vital to our sense of identity.  Race was made up to support the economic prosperity of the South – and the North.  Africans arrived in this country before slavery even existed and lived as free people. Then the slave trade came, providing a handy source of free labor.  How could God-fearing Christians support such exploitation of human beings like themselves?  They couldn’t.  Much easier to declare the Africans inferior and brand them based on their skin color and other physical features.  Modern day race and racism was born.

This history and genetic facts do not obscure the meaningfulness of the experience.  When I talk about race in this blog post, then, I’m talking about an experiential phenomenon, not a genetic reality.

From the onset of slavery in this country, we as Blacks have sought to achieve our rights and recognition as free and equal citizens.  We have had to fight for our rightful place; our name needs to reflect our perceptions of our identity and our right to be treated with respect.

Is this even a meaningful discussion?  This is all symbolic. It doesn’t represent meaningful change.

Of course, there are those who would argue this change is meaningless until the everyday lives of Black people change. 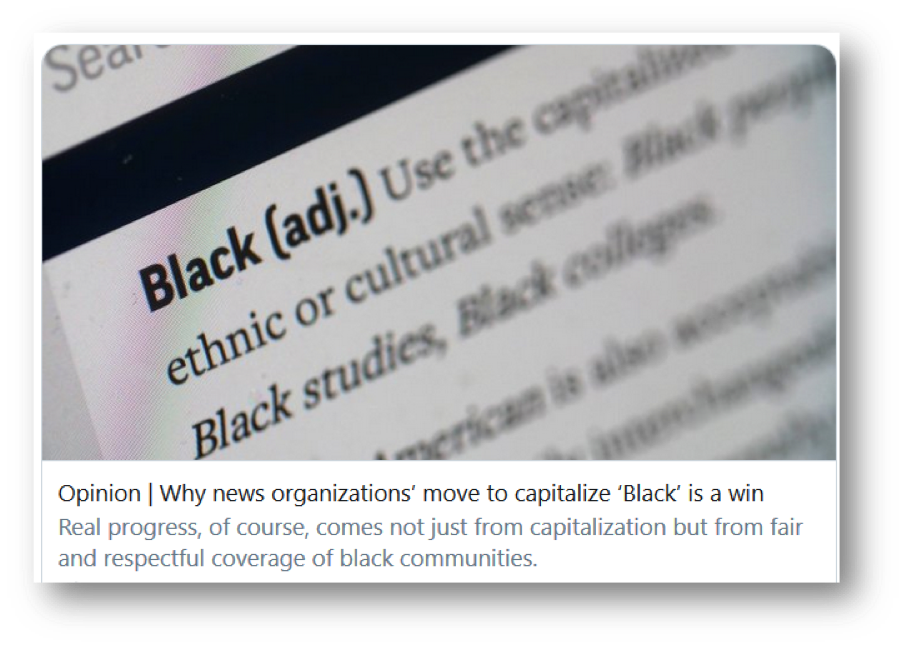 This is a chicken-egg question. Does our self-identity influence our capacity to create change, or does the fact of change lead to a redefinition of ourselves?  I believe the relationship is interactive.  Briefly, language constructs social reality. My conception of myself as a Negro was far different from how I think of myself as a Black person or an African American, living in a country where the legacy of slavery and segregation persist.

The decision to capitalize is another step forward.  Capital B connotes a level of respect that small b does not.

How are we supposed to know what is the right term is?

First, here’s what not to do.  About a decade or so ago, I was talking with a colleague, let’s call her Beth, about a woman we both knew. Somehow the second woman’s sexual orientation came up. Beth said, “I’m not going to refer to her as a lesbian. I don’t like that term. I prefer to say gay.”

I was stunned. Beth was heterosexual. I remember thinking to myself, “Who gave you the right to decide what to call someone in another group?”

So here’s how to handle the situation: If you’re confused about a person’s identity and know them well enough to inquire, ask them. There is no uniform right answer.  The right answer is whatever the person wants to be called.

Terms change from decade to decade and individuals have their own views of how they want to be perceived.  Ask the person their preference, then use that term.  Respectfully.