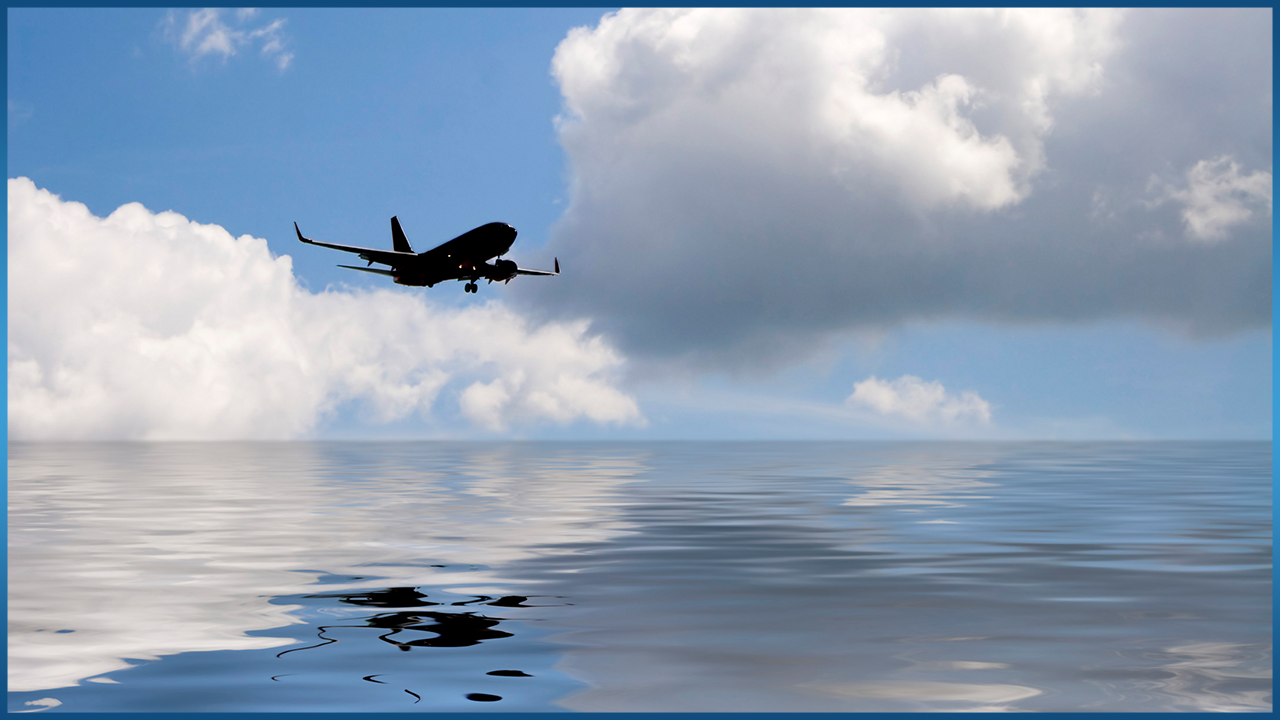 At the 2016 Democratic convention, First Lady Michelle Obama proclaimed to an adoring crowd, “when they go low, we go high.” The words were met with rapturous applause.

Yet the quote had its detractors. I have friends among them arguing that to go high means to put one’s head in the sand. To them, going high means letting people get away with underhandedness and brutality. I see it differently. This blog post explains why.

Four months after Michelle made that famous speech, Donald Trump unexpectedly won the presidency. Stung by their defeat, leaders began calling on the Democratic Party to fight fire with fire.

Social media joined the discussion. One person posted in @Democrats:

Jenelle Hill, an author with The Atlantic, posted a thoughtful explanation about her concern with going high.

I can relate to what she is saying. The people with whom I have been debating about the value of “going high” all cite their right to feelings of anger, upset, and historical betrayal.

And again, that’s all true… some of the time, for some of the people. My position is not about the validity of their feelings or their perception of what seems so obvious. When you feel hurt and wounded again and again, “going high” seems pie in the sky, futile.

When going high is the best path

I’m looking through a different lens, the lens of how people change. If the goal is only to express feelings of distress and anger, then of course the detractors are right. Staying silent when you want to retaliate is painful and can create feelings of impotency. The natural inclination is to want to defend yourself in the moment.

This is why the civil rights movement required training to participate in protests, especially in the beginning. 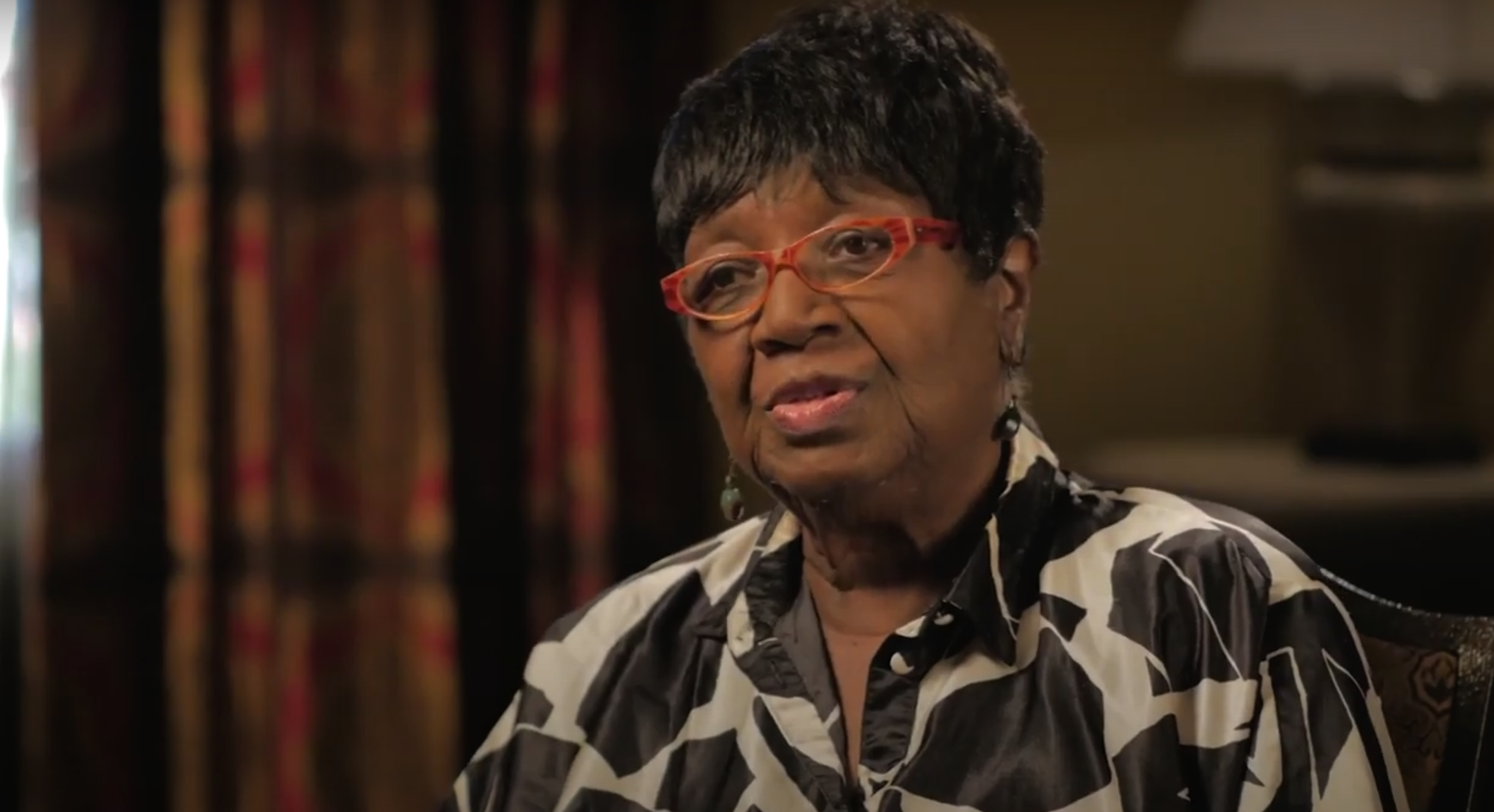 The training was brutal and required firm resilience. 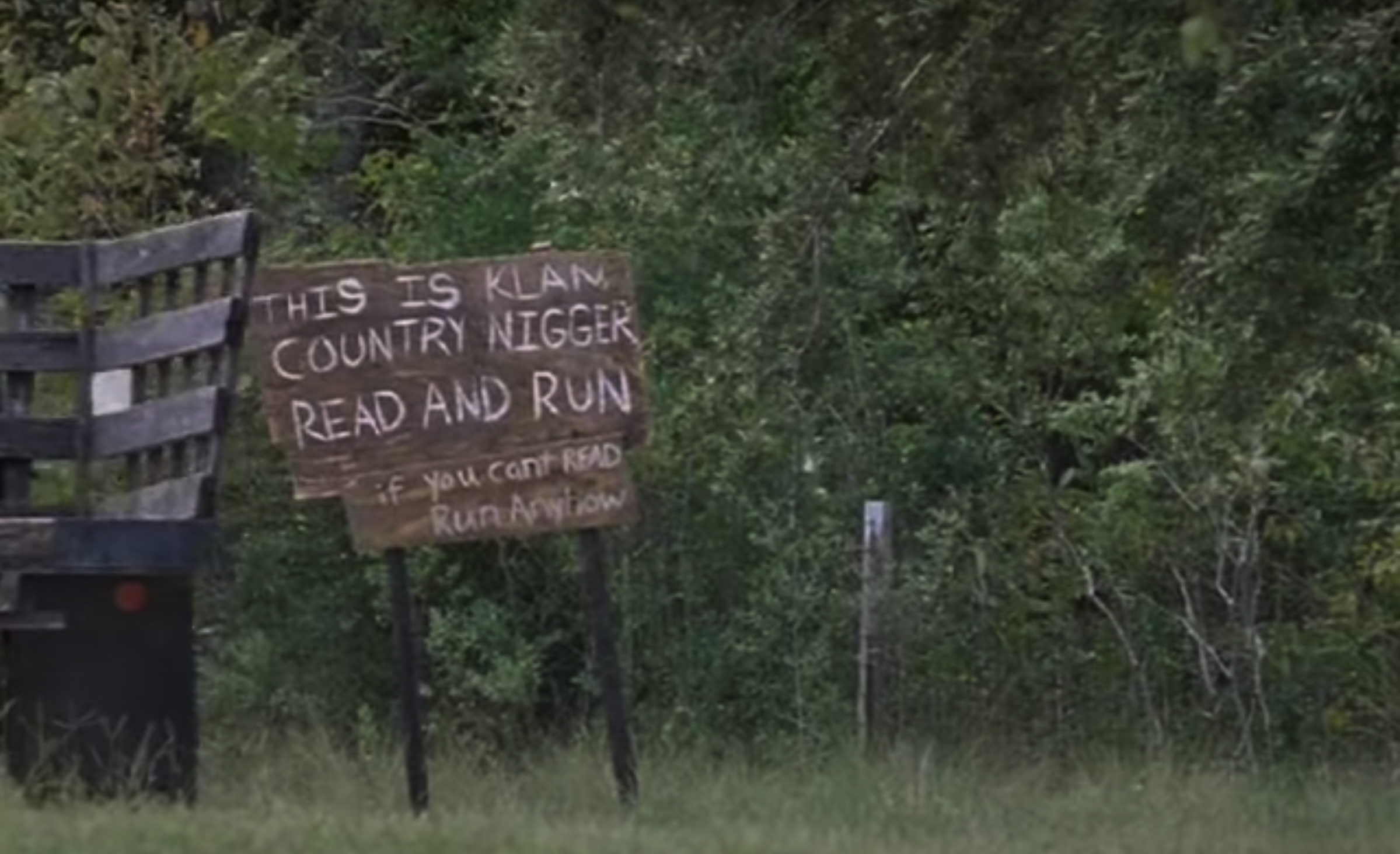 And of course, that’s what they wanted to develop: resilience to withstand assaults on one’s person and character.

Why put one’s body and emotions on the line?  People did it willingly again and again because they understood that the focus of the protests was not the Bull Connors or George Wallaces or other famous segregationists.

The focus was on winning the sympathy of the White American public, which had remained indifferent to the plight of the American Negro.

The question was how to garner their attention. Television served that purpose.  One weekend, at the height of the civil rights movement, a Jewish college friend invited me to her home in New Jersey for the weekend. She cautioned me that her parents were “generally not prejudiced,” and their objection was solely to her having a Black boyfriend.

That evening in May 1963, I sat in the living room with her father and mother watching hoses and dogs turned on protesters.[5] Her father turned to me and said, “What kind of people would do this to children?” Prior to that moment I had wondered whether the protests would succeed. Looking at his face, I knew then they would, and it was just a matter of time.

I don’t know if he had even thought about segregation prior to that moment. He certainly had objected to his daughter dating a young Black man. Yet watching the television he had to align himself with one of two sides and he chose the nonviolent one.

The strategic importance of nonviolence

Armed violence has been a successful strategy for many movements. Although the struggle against apartheid in South Africa was mostly notable for its nonviolence, toward the end, Nelson Mandela did begin to permit violence. By the time he did, world opinion had shifted in favor of the Black South Africans because of the successful use of nonviolence in the beginning.

Even though violent tactics may work sometimes, the research clearly suggests that the strategic advantage goes to nonviolence.  Researchers Chenoweth and Stephan at Harvard[6] collected and analyzed data on violent and nonviolent resistance campaigns between 1900 and 2006 that resulted in the overthrow of a government or liberation of a territory.

The results turned her earlier paradigm on its head: she had believed in the strategic logic of armed resistance and suspected that only violent force had achieved major social and political change. But it turned out that in the aggregate, nonviolent civil resistance was far more effective in producing change.

Nonviolent campaigns are easier for many people to join – you don’t have to use a weapon. They attract support, tacit or not, from the elites. The family that watched children being attacked by dogs and hoses wouldn’t have been as sympathetic if the children had thrown stones right back.

Most important, nonviolence rejects the playing field of the ruling party. As the researchers explained:

If the civil rights protesters had turned violent, they would have given Bull Connor all the ammunition he needed to maintain and defend his territory. As it was, although police could use force in the beginning, in the end they had to acquiesce. I never forget I am able to do what I do – this blog, for example – because of their sacrifice.

The focus of the protesters was not on Bull Connor or the other sheriffs who beat, tortured, and killed protestors.  They kept their eyes on the prize.[7] They were not willing to satisfy the temporary personal impulse for revenge. The goal was liberation, and the means to that end was to gain public support.

So what’s the alternative to going low?

Is it possible to go high and still be active in the cause for social justice, offering more than thoughts and prayers?

We have some wonderful examples of this recently. All over the country people are creatively finding ways to protest such injustices as police brutality, racial injustice, children placed in cages.

One of my favorite examples this year happened after the September 2020 presidential debate when Trump was asked to disavow the Proud Boys, a far right group associated with violence and White supremacy.9  His response included the phrase, “Proud Boys, stand back and stand by.”

In rebuttal, George Takei posted on Twitter a call to LGBTs to take pictures of themselves and post them with the hashtag #proudboys.

The response was immediate. The LGBT community posted pictures of loving couples.10 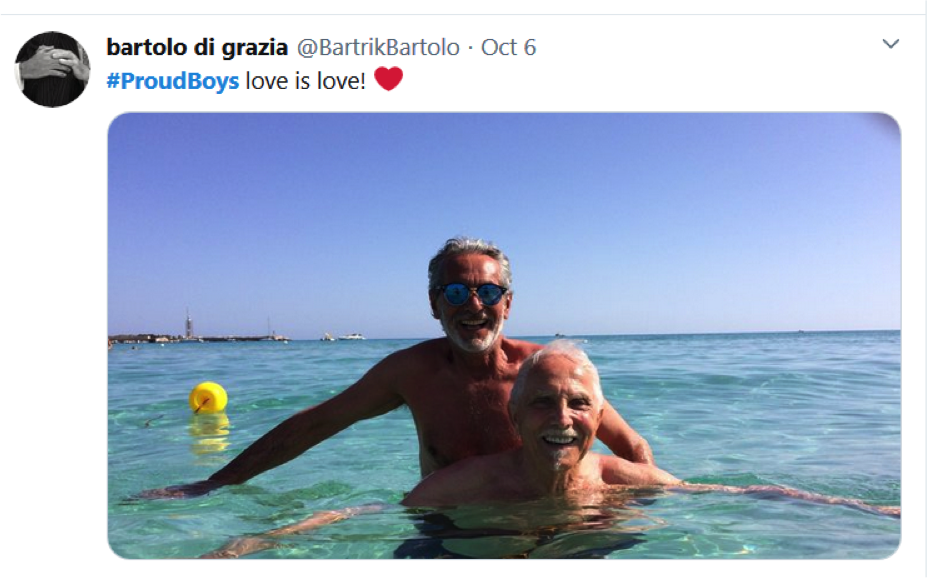 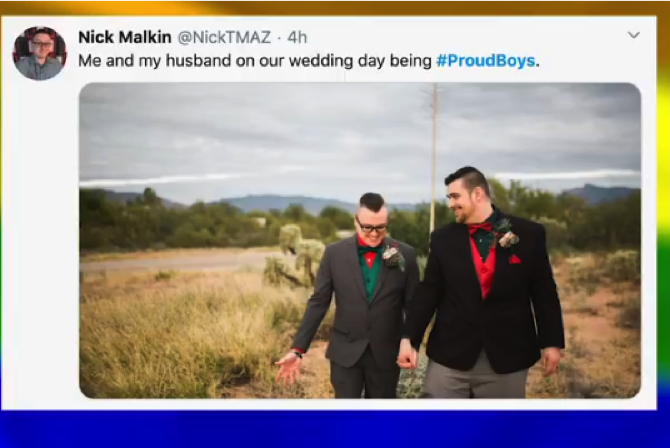 There are many ways to go high and still be in action: Nonviolent protest groups such as Black Lives Matter, racial dialogue groups, teach-ins by faith-based organizations,11 get out the vote groups, and actions to take down Confederate flags and monuments [blog #7].

Groups engaged in feeding the hungry, clothing the poor, housing the homeless, and finding jobs for the jobless are included in this category of nonviolent social justice actions. The hungry, poor, and homeless need at least the basics to advocate for social justice.

None of these tactics appeal to you?  Here is a reference for 198 Methods of Nonviolent Actions.12  You will surely be able to find a tactic that you and your group can use.

What if the affront is interpersonal?

What if the person offends you or someone else right in front of your eyes? For example, suppose Samantha (whom you don’t particularly like anyway) completely ignores comments made by Lily, the one Asian American female sitting at the table.

Again, the question is, what is your end game? Do you want solely to vent your feelings and make Samantha suffer?  Or do you want Samantha to reconsider her actions?

If you want to jump on Samantha without regard to the impact on her, then what I am saying here is not relevant to you.

If your goal is to induce Samantha to rethink her behavior and engage in more inclusive behaviors toward Lily, then read on for suggestions based on the research and my personal experience.

To begin with, going high does not mean ignoring the behavior or sweetening up your objection with unwarranted sugar. I also will not suggest the trope of focusing on the behavior, not the person.

Letting a person know they have engaged in socially unacceptable actions can still provoke the intention to change, provided that you place the situation in a moral context and use a thoughtful, calm tone of voice. This is called “persuasive blaming.”13

In one study, people who were called out for implicit biases – and even blamed for it and told they should feel guilty – were not more resistant to changing their behavior than those who were told they were not blameworthy.13

In the situation involving Samantha, what would it mean to go high when her behavior is so reprehensible to you?

Look at the chart below.

In a research study, the verbs in the bottom row were assessed by study participants according to their social acceptability to use when someone violates a moral code.14  Those on the left column were assessed as socially acceptable responses while those on the right were not.

What this means is that if you witness someone violating a moral code and inform them by objecting, disapproving, finding fault, reprimanding, or reproaching, others are likely to view you as going high and your change attempt is more likely to be persuasive.  On the other hand, if you attack, revile, vilify, berate, or rebuke, you are likely to be seen as “going low” and instead of being motivated to change, the person being berated is likely to resist change.

Let’s play it out.  How might you point out Samantha’s behavior:

In blog #18, Dr. Barbara Love talks about her discovery that even members of the KKK were human beings. Going low with someone who offends you may feel good, but it’s not likely to induce the person to change and move us that inch closer to a world that works for everyone. Dr. Love did not claim that the friendship they developed changed him in some way, yet the possibility exists it did.

Yes, it’s tiring to figure out how to correct someone who is unknowingly saying insulting things. The desire to call out in an insulting fashion rather than call in to community [blog #13] can be overwhelming.

Yet those who have their eyes on the prize and are committed to the inevitability of the quest for racial and social justice have to rethink whether their desire for immediate retribution is worth the price.

To them, Paolo Freire offers this advice:15

Those who don’t know, don’t know that they don’t know. If I want to do my part to help create a world that works for everyone, this means that I will choose to be effective rather than right [blog #13]. My hope is that you will too. 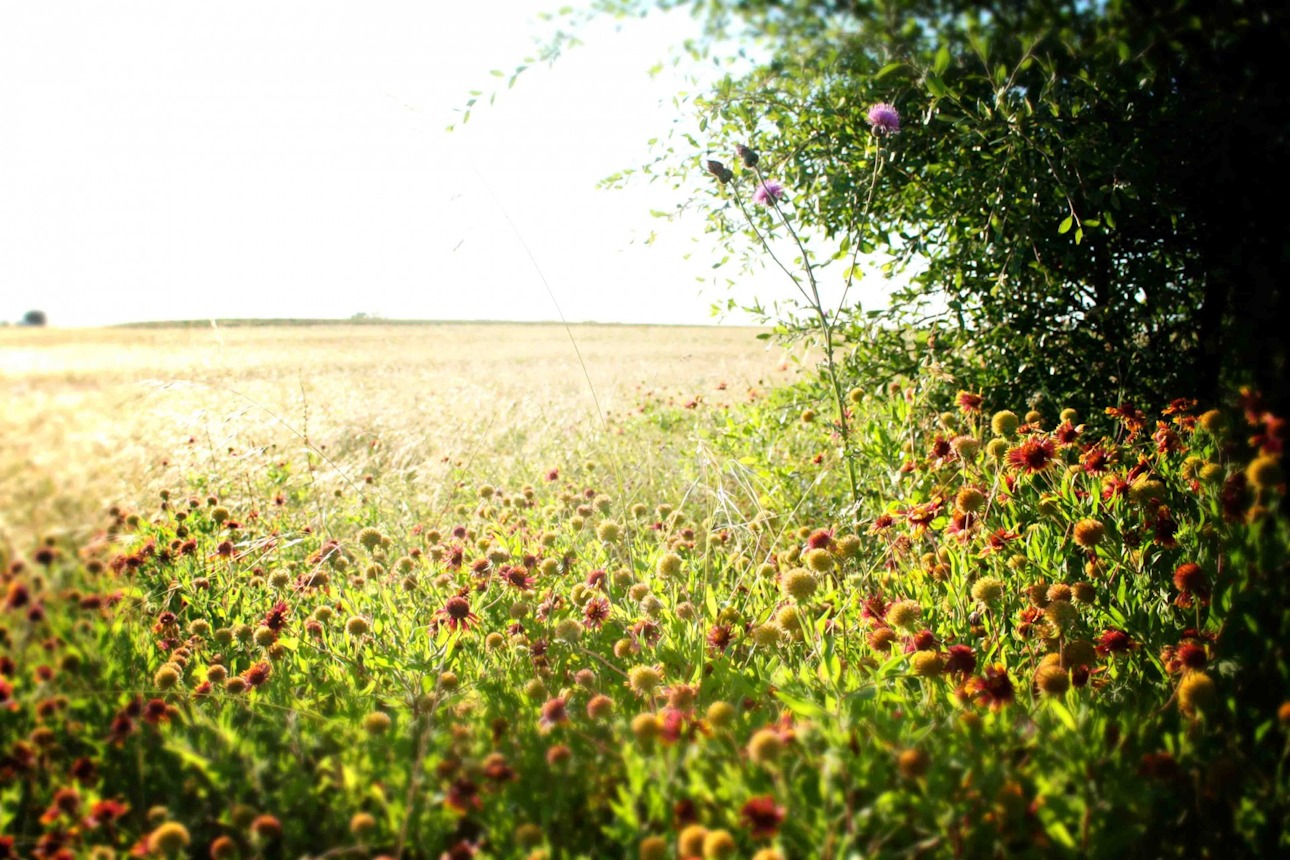 [1]  Hilary Clinton: "You cannot be civil with a political party that wants to destroy what you stand for"

[3]  Activist Barbara Allen Discusses Training for Civil Rights Protests and Her Experiences, His Dream, Our Stories, 4:05-4:38

[11]  Healing the Heart of America, Unity of Houston.