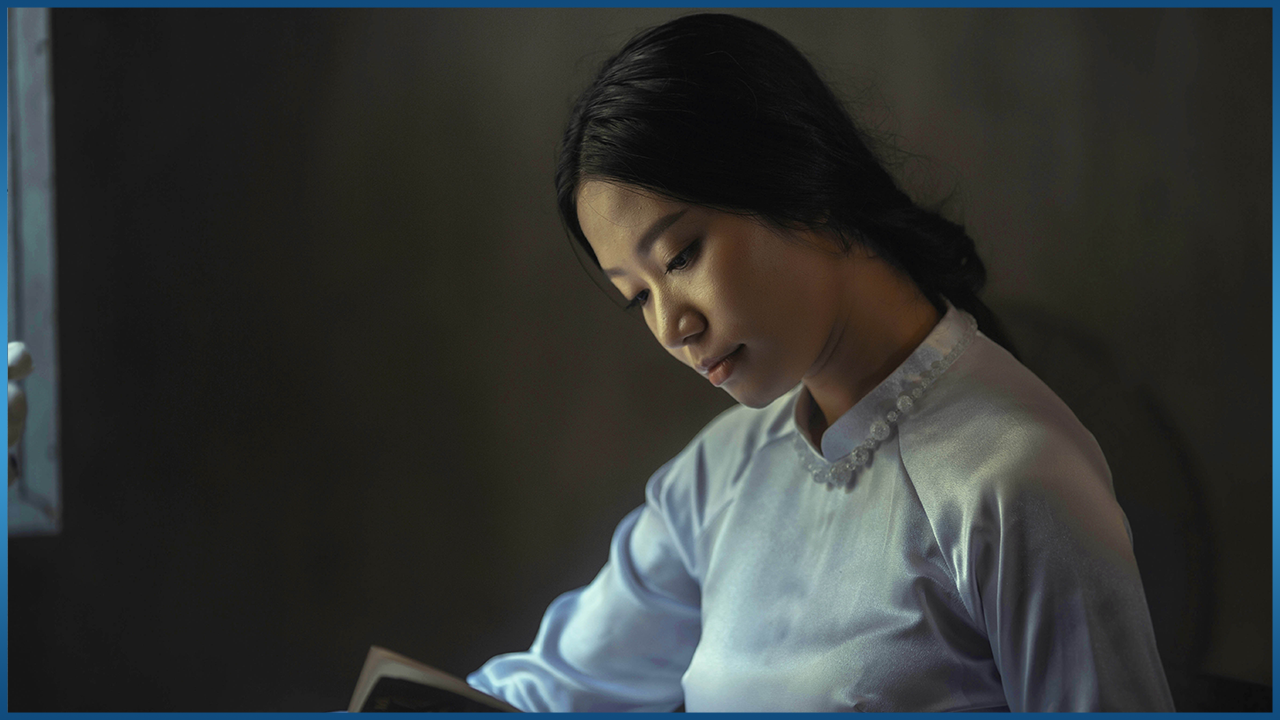 Any conversation must include clarifying what we mean. Are we talking about the same thing? Readers have requested that we offer definitions of words commonly used in the racial and social justice sphere; hence, this blog.

These definitions are culled from many sources (a few are listed at the end). As Alice found out, some people have different definitions for the words we use here. We are interested in your preferred terms and what you think of ours.

We make no pretense of covering all the terminology. This glossary is simply an introduction to social justice terms. In a subsequent blog post we may add more, particularly if you ask (hint hint!).

In this glossary, we cover these topics (click on the category you would like to jump to):

Let’s start where the journey begins.

Diversity refers to the all-inclusive ways in which people differ. Think of it as a numbers game. How many people in A, C, and F categories are here? Technically, the term does not apply whether the people in these different groups are recognized or valued.

Inclusion happens when every member, including traditionally excluded people or groups, is involved in decision-making about processes and activities. People who feel included have a sense of belonging and value within the group.

Equality is sameness in treatment. Equality under the law, for example, is widely regarded as an important value.

Equity brings about fairness, which isn’t the same as equality. Some people face barriers that others do not. Special accommodations for people with physical or mental disabilities is an example of an equitable policy. People with a diagnosis of ADHD, for example, do not receive equal treatment when tests are timed. Rather, the equitable policy is to relax or eliminate time restrictions.

Social justice ensures that every person or group has an opportunity to maximize their talents. When social justice is achieved, no one is at a disadvantage based on their identity. 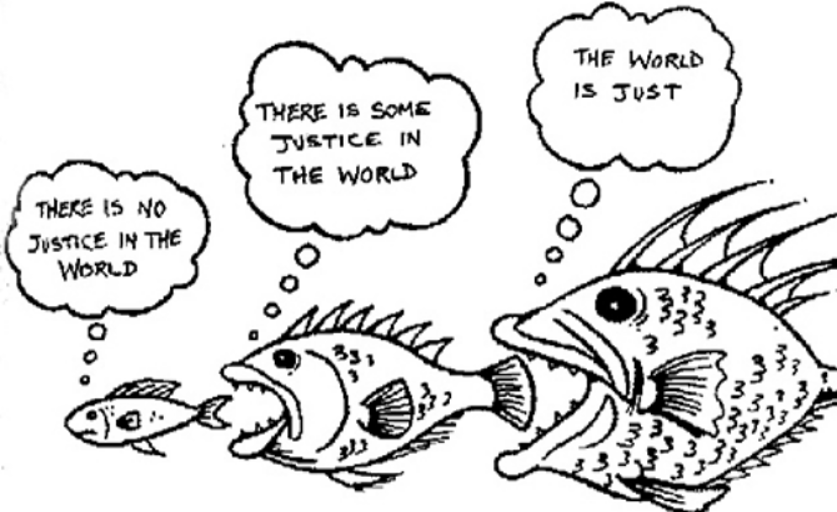 Any discussion of inequity involves a definition of dominant and nondominant groups.

Normally, dominants are considered by society as the default, the standard against which everyone else is measured. Little consideration is given to context or how they accrued that power and status; what exists now is all that matters.

Nondominant groups are those who have less power and status than dominant groups. This may result in their being marginalized or oppressed by the dominants and then blamed for their situation. Generally, they are expected to conform to dominant group expectations. Their history undergirds how they view themselves and how they respond to dominants.

An ally is someone from a dominant group who actively supports people from nondominant (marginalized) groups, using their own privilege or power to advocate for those who have less. An ally recognizes their own privilege and works in solidarity with oppressed groups. Effective allyship requires considerable commitment as we have described in several posts (blogs #20, #21, and #35).

Any discussion around race is fraught with not only varying definitions, but also heavy emotional connotations.

Race is a social construct, not a biological attribute. Current conceptions of different races were formulated during slavery to distinguish between those who were more easily identifiable as slaves (e.g., Africans) and those who were not (e.g., indentured Irishmen). Readily observable features such as skin color, facial features, and hair were used to classify people into five racial categories: African, Asian, European, Native American, and Oceanian.

Contrary to popular opinion, there are more genetic differences within racial groups than across them.[1] 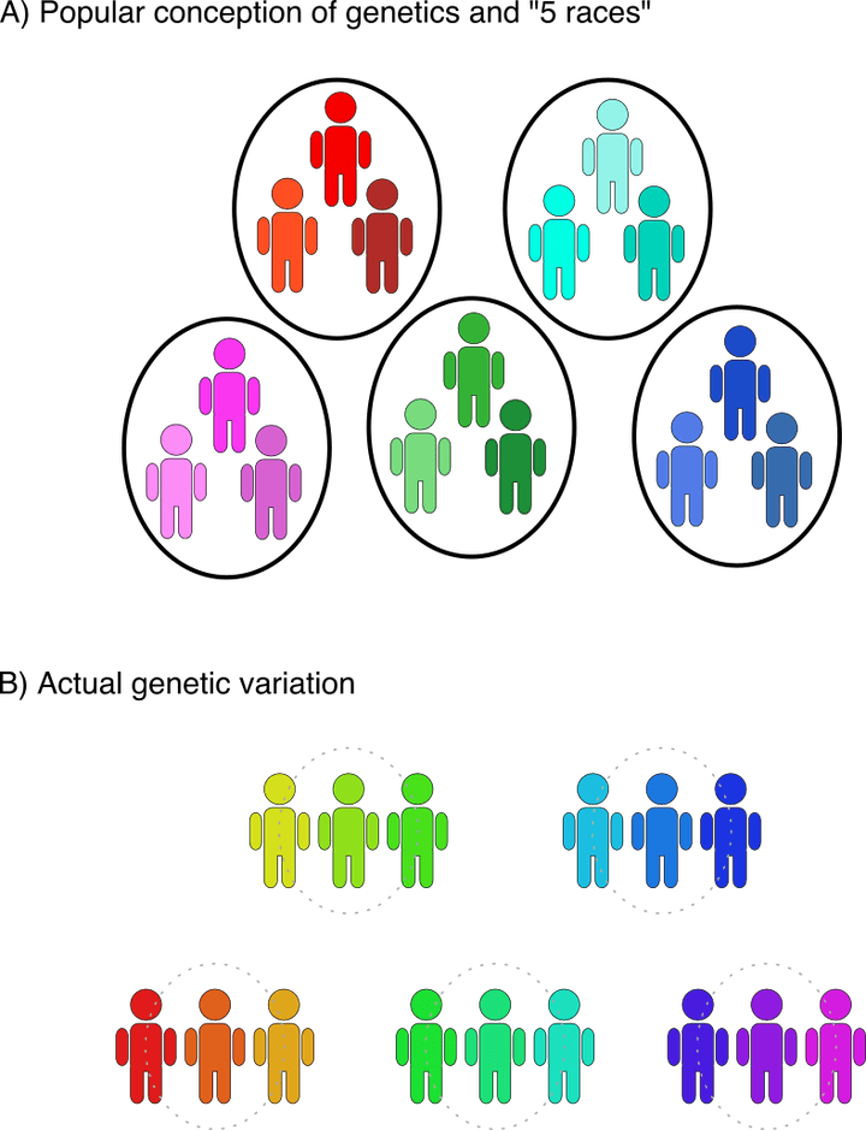 Figure 1: “Race” cannot be biologically defined due to genetic variation among human individuals and populations. (A) The old concept of the “five races”: African, Asian, European, Native American, and Oceanian. According to this view, variation between the races is large, and thus each race is a separate category. Additionally, individual races are thought to have a relatively uniform genetic identity. (B) Actual genetic variation in humans. Human populations do roughly cluster into geographical regions. However, variation between different regions is small, thus blurring the lines between populations. Furthermore, variation within a single region is large, and there is no uniform identity.[2]

Although race has only a tiny genetic basis, people with similar ancestry based on the geographic origins of their lineage do commonly share a group identity similar to ethnicity. For that reason, some people are leaning toward using the term “ancestry” rather than race.

Ethnicity is a broad concept encompassing both genetics and group identity based on shared values, behavioral patterns, language, and history, united by a shared geographical base. This often includes shared political and economic interests.

Culture is the term for a social system of meaning and custom developed by a group of people. Usually people from the same geographical region share a common culture.

Bias is defined as a negative opinion of an individual or group based on their identity. These opinions, consciously or not, create barriers to inclusion, performance, and engagement.

Prejudice is literally pre-judging. Bias is a cognitive appraisal of a person or group, while prejudice is an attitude (positive or negative) toward that person or group. Generally, when people refer to prejudice, they are thinking of negative attitudes, but prejudice also can be positive. Example: The school coach was prejudiced toward her daughter on the team and gave her a top position.

Microaggressions are mild forms of discriminatory acts. Often the person perpetuating a microaggression is unaware of the effects of their action, while the target of the microaggression wonders how they can complain without appearing petty or disrupting the relationship.

Types of racism and their effects

Although racism is a form of bias, we are discussing it separately due to its deep-rooted power. Racism occurs when bias translates into action. One group has the power to discriminate via institutional policies and practices of the society.

Individual racism is negative beliefs and practices perpetuated at the individual level.

Structural (includes systemic and institutional) racism involves normalization and justification of dynamics that routinely advantage Whites, while producing adverse outcomes for people of color. At the policy level, ordinances and statutes grant legitimacy to one group while denying it to another. At the organizational level, policies and regulations do the same.

Emotional tax is the cost to members of nondominant groups when they feel they must be on guard to protect against bias. As a result, they do not fully express themselves and performance may suffer. Emotional tax was described in several posts (blogs #9 and #12).

Internalized oppression is deeply embedded negative attitudes toward oneself or members of one’s group as a result of incorporating those beliefs from societal messages.

White fragility, privilege, and supremacy are used a lot. What do they mean?

White fragility occurs when Whites cannot tolerate even a minimum amount of stress from racially charged interactions where they fear they are viewed as biased. A common reaction is denial or a negative emotional response (blog #2).

White privilege comes from advantages resulting from being White. It occurs when a group of people default to the norms and values of Whites, while considering any other group as a deviation from the norm.

White supremacy is a conscious belief in the superiority of Whites as a group that actively and deliberately devalues other social groups. Those groups are deemed less worthy and inferior. Some, but not all, White supremacists may feel entitled to use a violent approach toward those who differ.

A discussion around gender and sexuality requires clarity around terminology that may be new for many people. When talking with someone about their gender identity, it’s imperative that we respect people’s choices about the category with which they define themselves.

Cisgender refers to a person who identifies with gender at birth.

LGBTQI is an umbrella category for those who are lesbian, gay, bisexual, transgender, queer, and intersex.

Transgender people have a gender identity or expression that is different from cultural expectations based on the gender they were assigned at birth. Being transgender does not imply any specific sexual orientation.

Intersex depicts any combination of male/female traits and anatomy.

Queer is the overall name for a spectrum of identities and orientations that are counter to the mainstream. The term used to be pejorative but has been reclaimed.

Nonbinary refers to a person who does not identify as male or female; includes the terms genderqueer and genderfluid.

A citizen is legally recognized as having the rights and responsibilities of a particular country, by birth or naturalization.

A legal resident is not a citizen but has papers to demonstrate their right to reside in a country.

Immigrant refer to people who have left their country for various reasons, generally intending to become a citizen of the host country. (A green card, which confers legitimacy in the US, may be issued while an application is in process).

Refugee vs. asylee: Both terms include those who have left their country, usually due to political oppression or disease. They have no legal status but are allowed to live in their new country. Refugees generally apply for entry before arrival, asylees request asylum or protection after arrival.

An evacuee is a person forced to leave an area for safety reasons. Not to be confused with refugees.

Undocumented is the preferred term for people not legally recognized or permitted to be in a particular country; often they are denigrated and marginalized. Pejorative terms for undocumented people include alien and illegal.

Forced displacement: Contemporary term used to describe those who leave their country of origin involuntarily. Forms of displacement include forced labor, sexual slavery, domestic servitude, forced marriage, child trafficking, and other forms of exploitation. Not to be confused with immigrant, refugee, or asylee.

These are terms that we in Leading Consciously prefer to use. Sometimes, like most people, we slip and use a term inconsistent with what we have here. If we do so and you notice it, please let us know. If you disagree with one of our definitions, we’d love to hear it.

We welcome your feedback.

11 Terms You Should Know to Better Understand Structural Racism, aspeninstitute.org

Diversity and Social Justice: A glossary of working definitions, uml.edu

[2] Chou, V. How Science and Genetics are Reshaping the Race Debate of the 21st Century

[3] Hispanic or Latino Origin by Race