From Hardship to Allyship: The Value of Chronic Unease with Mark Hays (#21) 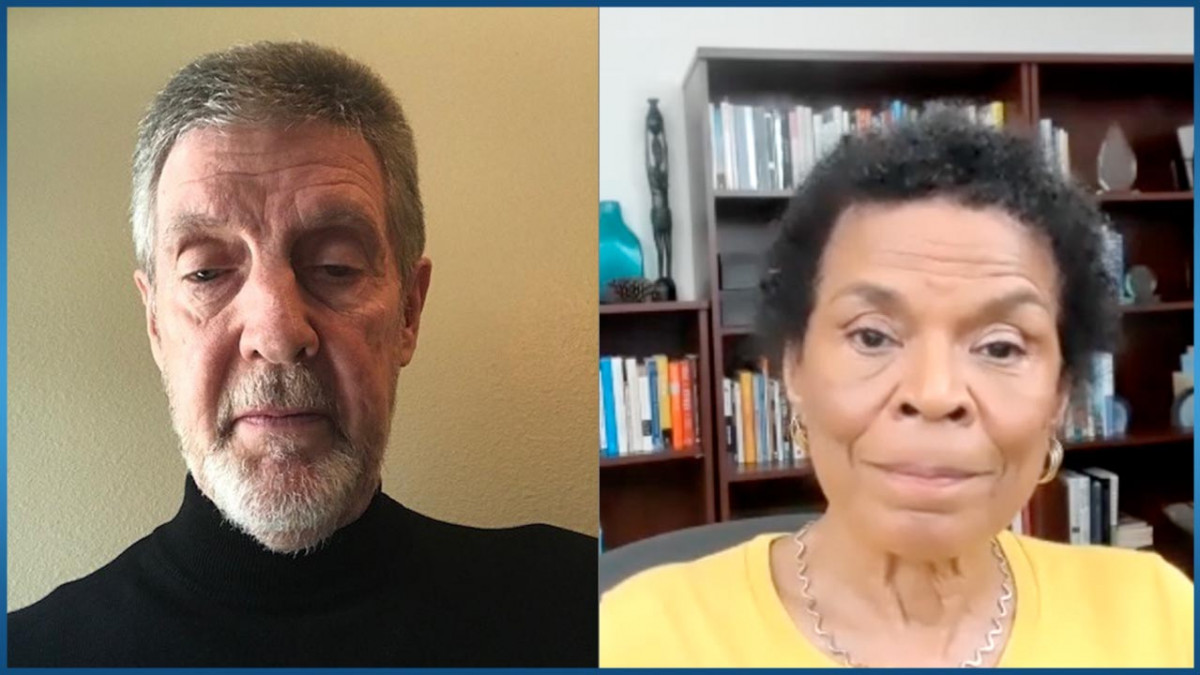 Hello everybody. Welcome to part 2 of my conversation with Mark Hays, an organizational consultant who specializes in inclusion and equity.

In part 1, Mark spoke about his growing up as a painfully shy and ostracized young man and challenges within his family of origin. Those experiences made him strong and cultivated both empathy and humility. He became committed to being an ally for racial justice.

This part of our conversation starts with my asking Mark about his continuing commitment to racial justice. He is that remarkably rare White person willing to take on true allyship. You will soon see why I was so eager to have this conversation with him.

At the end of the interview, Mark references Mary Harlan, a beloved friend and colleague of both of us, who recently transitioned. Both parts of this conversation are dedicated to her memory.


Jean: Why did you continue to challenge yourself in the race arena?

Mark: How can I live up to “I will not cooperate in my own oppression” if I suddenly leave one of the biggest areas of oppression in our country?

The song that inspired me is Peter, Paul and Mary’s “Long Chain On” about a woman in her cabin late at night who hears chains clanking. She looks out her window to see a White man with chains on, tattered clothes, unkempt hair, a long beard. He asks politely if she can spare a biscuit or something to drink. So she does that and talks about how gentle he is. And she says, Can I help you take the chains off? He says no, I'm not going to give my burden to you, I will carry these.

I've been working in business since 1991; corporations, not nonprofits. I've done non-technical training in energy companies. I've done diversity and inclusion work. I found a way where I do the things that are in alignment with my pledges to myself and not in conflict with people in the business. Sometimes these are small things; I am always looking for micro inequities, where things are going on that diminish people.

Jean: I have personally witnessed you take a principled stance on behalf of justice and in opposition to micro inequities. I want people to understand what you do, and the secret of how you're able to make it work.

Mark: Here's my approach: In one of the companies I was working for a new chief executive; I was in a role with responsibility for diversity and inclusion. I was waiting for three months in and hadn't heard anything from him. So I recorded two CDs of music on social consciousness, social justice, with songs that I thought would be cool to help him understand what it is. It's been three months, you're new to the company, here's a way maybe I could help you to get into it.

He sent me back the CDs in the same envelope, with a note on a post-it: “I'm a person that attends to the critical few things that are most important for the success of this organization. And this is not one of those now.” Then he avoided me. Eventually we were at a meeting where he would not make eye contact or look at me. He asked for questions. I kept my hand up, and finally he said, Yes, Mr. Hays, what do you have for us? And I shared something, a question around diversity, that was a pretty easy one for him to answer in a positive way. And, you know, he did that and kind of breathed a sigh of relief.

Jean: Let's dissect this. You tried one way, a soft way and multimedia approach. It didn’t work, then you got ostracized. Basically, you were treated as though you were invisible. Why didn’t it bother you? People would have wilted in your position.

Mark: The thing that was clear to me was that he was nervous about me. He knew my reputation in the company.

Jean:  You had a power base, and you were widely known as being effective in your job. So you didn’t think he could fire you because you had a strong enough power base that protected you?

Mark: Nobody even knew this happened. There were no repercussions for other folks out there. My intention was not to turn him out or anything. It was through other means that I got access to the sustainability initiative, and I was able to achieve my objective without him.

Mark: One time I was going through the stuff at work and volunteer work at the Center for the Healing of Racism. I was asked to be on the first board of directors at the Center. Some of the White men that I worked with would come by and ask in kind of a sneer: “So I understand, you're gonna be on a board of directors, how did that happen?” They knew it was for the Center for the Healing of Racism.

Jean:  Here you are a White male, you're describing being ostracized by your peers, you were ostracized as a child. White men look at you and say, “Oh, that's weird.” And yet, you're saying I'm doing what I do. Why didn't it bother you?

Mark: I pretty much learned that my shelf life on having a friend who is a White male might be four or five months. An example was a performance review. We got to the end of the of the review to the one critical piece of feedback. “I've had a number of complaints that when you're talking with and interacting with the employees of color in your group, that you're laughing harder and longer than you are with the other employees.” What is the price we pay for this? I've made my peace with who my friends are going to be and where I'm going to live and what I do.

Jean: Will some people listening to you conclude you don't like being White?

Mark:  I had no knowledge of who I was. So I started doing some research, and discovered that most of the family came from the Highlands of Scotland, and my father's side from Ireland. And so there's a wonderful history of fighting oppression, and social justice in those two groups. Also how the Irish became White by doing horrible things to people who were Black so that they could be seen as part of the group.

Jean:  What advice would you give to White men who want to promote justice and equity in a company, when most of the other White men in the company don't understand what they're talking about?

Mark:  Number one, I wouldn't give advice. I would ask: What do you think could be possible obstacles or consequences for you taking that path? You are going to get labeled at times, and there are going to be very difficult things that can happen to you.

Jean:  You have observed many successful people of color. What have you observed as a White man hearing other White people talk about them? What is it that creates success, so that the person of color can be themselves and still gain respect? What about people who say, that's unfair, because why does that person have that job? She doesn't know as much as I do, yet she got promoted.

Mark:  “Diversity” has been a shell game, Jean. Part of what I was hearing from this group from outside was quotas. Until we can do real inclusion and provide real equity, I don't think diversity is going to be any different than what it was before. Because we're not changing the primary fundamental element of not being able to talk about things like privilege and equity, to use that language and talk about how we're doing these things. And so we never get to where people who have privilege are going to have to talk about something else. We keep moving the shells and hiding the peas; we're still talking about can we do quotas, because White people will react negatively to quotas.

Over the years, what I've heard from White men in these circumstances is, if they do that, I've only got nine more years to go here. And they're not gonna get anything from me but the bare minimum. You put quotas in here and someone else may be getting the job that I could have gotten.

This is the first time I've had hope that we really can make some breakthroughs, but I've already started to see the default back to a diversity conversation. It's around how to do the hiring. It's not around equity and antiracism.

Jean:  So the word diversity means numbers; at EEOC it still does. Loss of privilege for those who thought there's a meritocracy that favored them; it's always implied that somebody whom we normally wouldn’t hire is going to be hired. It’s about winners and losers.

Tell me about equity. What does that mean to you?

Mark:  It was described to me as a vaccination theory of education in the United States: I go to a course, it's like getting a vaccination, I've taken the course, I can forget that and move on to the next course. A lot of the work that we're doing in this analogy is maintaining a chronic unease. That's the way we find things. It's not about forcing ourselves to be negative; it's more about maintaining that sense of chronic unease to make sure we're doing everything we can do, to not go into those kinds of organizations to create something that hurts a bunch of people.

Jean: Mark, that's why we're here. That's why you're here.

Mark:  That's my guardian angels’ work and a lot of people helping me to understand stuff. I know when I do things like that.

Jean:  You were able to stop abusive behavior without berating the abuser.

Mark:  What would I share with people who are Black coming into an organization of people who are White who want to participate in this stuff? How are you going to intervene in a way that will make this something that may be a learning moment for everybody around you versus making a scene? I have had the choice most of my life if I wanted to not to have to do those things.

There was a new role in one of my companies. The only reason that I agreed to it was I got six months of coaching with you. One of the questions you asked me was, who do you want to be in this role? And how does that lead you to getting the results with developing the people and hitting the objectives? I said, I want to be the guardian angel giving people safety.

I don't know how to express who you are to me and part of the reason it felt good doing this at this time. You know, I don't like doing these. But if I wasn't going to do this after all I learned from Mary [Harlan] and the faith and trust she had in me, that would just be a ridiculous thing. So this is true of Mary as well.


Leading Consciously concepts and skills
covered in this post