From Hardship to Allyship: The Makings of an Ally - A Conversation with Mark Hays, Pt. 1 (#20) 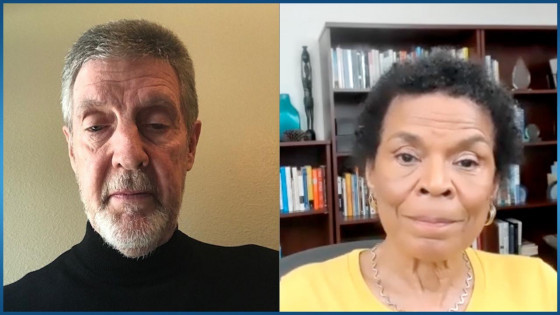 I met Mark Hays many moons ago at the Center for the Healing of Racism. Our paths crossed several times since then, until one day we ended up at the same diversity initiative. As I was thinking about whom to invite for these interviews, Mark immediately came to mind. And so here we are.

Mark is an organizational consultant specializing in leadership, change management, relationship and engagement, and inclusion and equity work. He holds a master’s degree in education/ counseling and completed 30 hours towards a master’s in history from Texas Southern University. He has been an advocate for racial and social justice since childhood.

The conversation with Mark was so rich, it will be in two parts. In this part, Mark talks about his upbringing and how he learned to be an ally.


Jean: How did you become committed to antiracism and social justice? What is your background?

Mark: I grew up in Kansas City, Kansas; I didn't know about my heritage, ethnicity, until years after my parents had passed. To get to the baseball park we had to drive through the part of town that was African American; as we got close to the railroad tracks, my father would roll the windows up and tell me to lay down on the floorboard. He said, this is an area that people can hurt you, they'll do things to you. They didn't teach hate, they taught fear.

My senior year of high school, the school was desegregated. I would see who was out there outside the circle with me, which led me to reach out to people who were Black coming into the school, sitting outside by themselves.

Jean: ...because you had been so such an outcast, you studied other outcasts.

Mark: My father had worked for the same company for years; six weeks before he was eligible for his pension, the company fired him. Authority lost its meaning.

By taking counseling and the psychology courses I was trying to find out who I was. I didn't have this word for a while yet, but empathy was what I was trying to get to.

The librarian at college gave me a very simple book about the Holocaust. How does humanity happen? I wanted to understand this, so I took some German history. I was trying to understand what can make that kind of thing happen.

I grew up around a legacy of culture of the Native American tribes. So now I've been given three pieces of a puzzle. How could there be that respect for Indian culture and Indian peoples?

Jean: How did you become Mark? What was what was now different?

Mark: The only job I could find with a college degree was as a parent in a group home for juveniles. I'm 22 years old, and I now have 12 sons that I'm responsible for 24 hours a day, often eight to 10 days in a row, without having any time off. And I think over the two years that I was there, at the home, I had two young men that were White, all the other folks in my cottage were African-American. I was doctor, friend, disciplinarian, confidante… you're wearing so many hats, you don't know which hat you got on at one time. And understanding the dynamic of people who have been damaged and hurt and what accountability there is.

Jean: What I'm understanding is that you started to learn how to facilitate honest, difficult discussions, working with this mixed race of kids who like yourself had been outcasts.

Mark: I did something I was told you shouldn't do: Don't be vulnerable. These can be manipulative children. Part of the reason is they were beaten, they were doing bad things yet. There's always stories around that. And I wasn't buying it. I said, how do we talk to each other?

Jean:  I'm struck by how your gift comes out, that they felt they could be honest with you. You're talking about empathy and vulnerability as two of the keys that you have as a young White man, a willingness to be empathetic and vulnerable?

Mark: One day I’m jogging at Hermann Park and I see a young man jogging towards me. And we know each other. He had been in the group home, went in the military and through officer school, and was doing really well. And just so thankful for my part in that occurring for him. Again, I was just blown away by that. 25 years later and he remembered it.

Jean: You then had a chance to interact and break through that few White people get a chance to do.

Mark: It's around not judging. It's around asking questions and being real clear going into conversations with them.

One of the main things I learned at the juvenile home was if I want to help folks, I need to be healthier myself. I decided that if I wanted to make more than $300 a month, I needed to go ahead and get my master's degree. That led to lots of jobs with people who are different races, which made me realize a lot of people don't know what to do about racism.

I have felt very strongly that I've had a guardian angel. I might not have made it out of Kansas City, I was close to taking my life there. I think my guardian angel has some connections back to the Holocaust as well. Spirituality is very important to me; there are times that filtered in on me with the guidance.

Jean: Your parents disowned you? Because of the people you were associating with?

Jean: I want to get to Center for the Healing of Racism. Yeah. Why did you go? What did you learn?

Mark: I heard about the Center for the Healing of Racism from the Houston Chronicle. And my life began when I when I stepped into that room.

[In one session] the last thing we did before the regular closeout, the [facilitator] turned to me and said, one final thing for you to do: I want you, starting with me, to walk up to each person, shake their hand, and say, Hi, my name is Mark, and I'm White. Okay, my name is Mark, and I’m White. I’d cry with some, I'd laugh with some, I was just feeling a bit of an empathy connection.

Jean: Mark, you're talking to people who have no concept of why that would be great, energizing, rather than shameful. Please explain that difference.

Mark: People need to talk about those. White people hear “racism” and “privilege” as the two words that scare us most. We were talking about the difference between sympathy and empathy and guilt.

[An African American man and I from the Center were invited to talk with a Rotary Club. After the talk] 22 people were in a line to talk to the gentleman that I came with. They were White and asked him, was that okay? Did I say something wrong? Really my heart was in the right place, I just was confused. I didn't quite know what to do. And [he] would talk through a bit and say, Well, here's what you could have done, you know, in those tough situations. So he had empathy for them 22 times, it was a variation on that same conversation. Each time that happened, he shrank.

Jean: Why were you energized in [your] situation [saying you were White]? And he was depleted in this other?

Mark: I was releasing poisons and toxins in my system. I'm so worried at times that some of the stuff is going to come back out of me. I will not participate in my own oppression.

[Part 2 to be continued next week.]


Leading Consciously concepts and skills
covered in this post