Rebuilding Freedmen's Town: What a Small Band of Committed People Can Do (#47)

This is a story of community, commitment, and perseverance. It illustrates what happens when a small band of committed people[1] is able to mobilize hundreds of volunteers for a cause they deeply believe in.

Making a way when there is no way

Freedmen’s Town, Houston, Texas, was founded around 1865 after the Emancipation Proclamation when freed slaves made the long trek on foot from plantations to form a settlement in an area still known as Fourth Ward.[2]  Because they were allowed to live only in uninhabitable swamplands near a bayou, the founders filled the area with dirt, bucket by bucket, until the land was firm enough to build their homes. This historic area is now known as the first Black settlement in the country and the last still in existence that holds much of the original architecture.

Displacement began in the 1930s as developments encroached on the area through eminent domain. Chunks of the area were carved out by construction of Houston’s city hall, the Gulf Freeway, a public housing project built for White defense workers, and expansion of the City’s business district. Many of the founders left the area and the average income of the residents gradually became poorer. The community’s close proximity to the Central Business District made it an easy target for developers and residents who did not want to commute long distances to go to work, a pattern well known throughout the country.

I have a personal interest in the area.  Beginning in the 1990s, my graduate social work students were suddenly writing heartrending papers about how gentrification was forcing the displacement of elderly and minority residents from their homes. Freedmen’s Town was an area of particular interest to our students, as several were active volunteers in various support activities. Through Dr. Nia Becnel, a University of Houston architecture professor who focused on preservation of historical neighborhoods, students from the College of Architecture became involved as well.

Gladys House and Lenwood Johnson, long-time Freedmen’s Town residents, were revered as community activists who led the mobilization to preserve the community. They were sought out as speakers in university classes and all over the city.

At the same time, I was serving as an organizational consultant in Good Neighbor Healthcare Center, a free health clinic serving the residents of Fourth Ward. Through their stories, I learned about the compelling history of the community and witnessed first-hand the fervent pride and dedication residents felt to maintain their community and their homes.

Efforts to preserve Freedmen’s Town have resulted in one victory after another over the years.  Among the most notable include designation of the area as a National Historic District, establishment of the Conservancy, some rehabilitation work by the City, and in the works a number of projects and a planned Visitors’ Center. 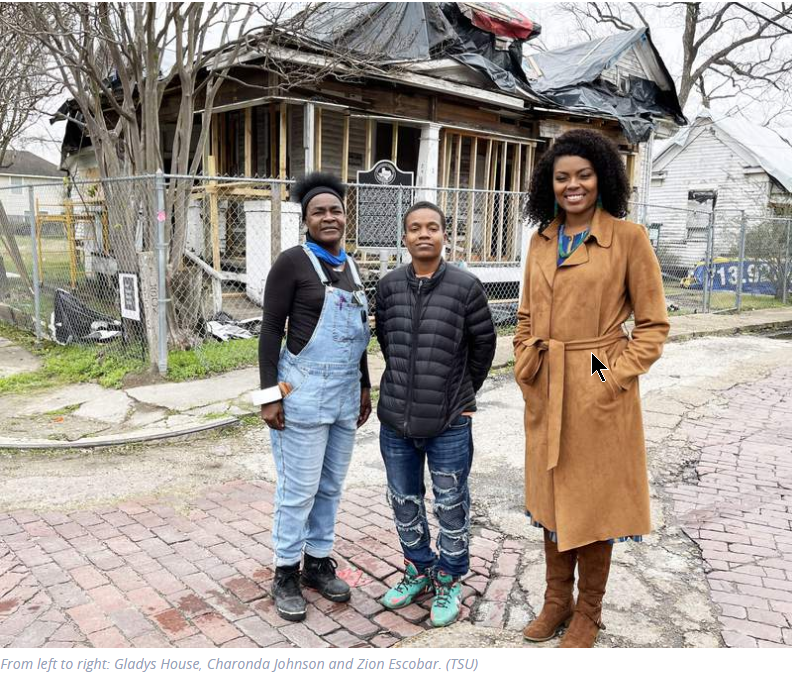 Inside the Effort to Preserve Historic Freedmen's Town

The program was sponsored by Houston’s Healing the Heart of America.  The video is reproduced here with permission.

There is one segment of the discussion that encapsulates the past, present, and future of Freedmen’s Town:

Wigglesworth: Are the majority of persons presently living in the Freedmen’s Town area renters or homeowners?

Wigglesworth:  And then I would guess the follow up question to that is, isn't that part of how this has become a problem because the owners weren't the residents?

HFTC: Correct. Residents don't have a vote or say in what goes on. Only the owners do.

Wigglesworth:  Right, and I assume there’s some relationship potentially to this and all the other systemic discriminations that were occurring since the Civil War, which included difficulties getting mortgages, etc.

HFTC: Correct. And what I want to share is that Black families were slandered out by some trickery.

Wigglesworth: Yeah, so the legacy of injustice perpetuates across the generations leading to these kinds of numbers.

HFTC: Correct.  I appreciate that question. So, part of why it's so important for people that understand this story is that they make exactly the connection that you just made there, Cindy, is that this place is what it is, because people didn't…have organizations like ourselves, helping to empower them, and that's why our organizations are so important because you have to have an advocate on the ground, helping do all these various things to tell the story…to create equity.

[1] The full quote by Margaret Mead is this:   “Never doubt that a small group of thoughtful, committed, organized citizens can change the world; indeed, it’s the only thing that ever has.”

[2] Here and below, most of the history of Freedmen’s Town is derived from McDavid, C. (2011). "When is "Gone" Gone? Archaeology, Gentrification, and Competing Narratives about Freedmen’s Town, Houston." Historical Archaeology 45(3): 74-78.